This FAQ was developed by the Secure Technology Alliance (formerly the Smart Card Alliance) to answer questions about EMV.

Financial institutions in Europe, Latin America, Asia/Pacific, Canada and the United States are issuing contact or dual-interface EMV chip cards for credit and debit payment (commonly referred to as “chip and PIN”) or migrating to EMV issuance and acceptance. EMVCo publishes global statistics on EMV issuance and acceptance.  EMVCo reported that over 6.1 billion EMV cards were in circulation globally at the end of 2016.  EMVCo also reports the status of “chip-on-chip” transactions; 52.4 percent of all card-present transactions conducted globally between January and December 2016 used EMV chip technology.

The U.S. has migrated to EMV chip cards. The U.S. Payments Forum (formerly the EMV Migration Forum) is a cross-industry body focused on supporting the introduction and implementation of new and emerging technologies that protect the security of, and enhance opportunities for payment transactions within the U.S. As of June 2017, the Forum has reported that approximately 45 to 50 percent of U.S. credit and debit transactions are chip-on-chip (i.e., an EMV chip card used at an EMV-enabled POS terminal). The payment networks also report that approximately 60 percent of ATMs and 50 percent of merchants are now enabled for chip.

2. Where has EMV been adopted?

Financial institutions in Europe, Latin America, Asia/Pacific, Canada and the United States are issuing contact or dual-interface EMV chip cards for credit and debit payment (commonly referred to as “chip and PIN”) or migrating to EMV issuance and acceptance. EMVCo publishes global statistics on EMV issuance and acceptance.  EMVCo reported that over 3.4 billion EMV cards were in circulation globally at the end of 2014.  EMVCo also reports the status of “chip-on-chip” transactions; one in three of all card-present transactions undertaken globally between June 2014 and June 2015 used EMV chip technology.

The U.S. is now migrating to EMV chip cards. The EMV Migration Forum is the cross-industry organization focused to address issues that require broad cooperation and coordination across many constituents in the payments space in order to successfully introduce secure EMV contact and contactless technology in the United States.  As of the end of 2015, the Forum estimates that approximately 400 million EMV chip cards have been issued in the U.S., with 675,000 merchant locations accepting EMV chip transactions.

The Forum has published a variety of resources to assist payments industry stakeholders with EMV migration; resources are available on the EMV Connection web site.

3. Why are countries migrating to EMV?

Issuers around the world are including chips in bank cards and merchants are moving to EMV-compliant point-of-sale (POS) terminals to increase security and reduce card-present fraud resulting from counterfeit, lost and stolen cards.

4. What are the benefits of EMV?

5. Why are EMV credit and debit cards and EMV chip payment transactions secure?

EMV cards store payment information in a secure chip rather than on a magnetic stripe and the personalization of EMV cards is done using issuer-specific keys. Unlike a magnetic stripe card, it is virtually impossible to create a counterfeit EMV card that can be used to conduct an EMV payment transaction successfully.

6. What is the status of EMV migration in the United States?

The U.S. is in the process of migration to EMV, with the initial fraud liability shift milestone complete in October 2015.

Additional information on U.S. EMV migration can be found on the EMV Connection web site.

7. How does EMV address payments fraud?

First, the EMV chip card includes a secure microprocessor chip that can store information securely and perform cryptographic processing during a payment transaction. Chip cards carry security credentials that are encoded by the card issuer at personalization. These credentials, or keys, are stored securely in the EMV card’s chip and are impervious to access by unauthorized parties. These credentials therefore help to prevent card skimming and card cloning, one of the common ways magnetic stripe cards are compromised and used for fraudulent activity.

Second, in an EMV chip transaction, the card is authenticated as being genuine, the cardholder is verified, and the transaction includes dynamic data and is authorized online or offline, according to issuer-determined risk parameters. As described above, each of these transaction security features helps to prevent fraudulent transactions.

Third, even if fraudsters are able to steal account data from chip transactions, this data cannot be used to create a fraudulent transaction in an EMV chip or magnetic stripe environment, since every EMV transaction carries dynamic data.

8. What is the proven impact of EMV adoption on payment card fraud?

Countries implementing EMV chip payments have reported a decrease in card fraud. As an example of the impact of EMV, the UK Cards Association has reported a dramatic reduction in fraud since the introduction of EMV cards.

“Fraud on lost and stolen cards is now at its lowest level for two decades and counterfeit card fraud losses have also fallen and are at their lowest level since 1999. Losses at U.K. retailers have fallen by 67 percent since 2004; lost and stolen card fraud fell by 58 percent between 2004 and 2009; and mail non-receipt fraud has fallen by 91 percent since 2004.”

Similarly, the national roll-out of EMV in Canada in 2008 had a  dramatic impact on fraud. Losses from debit card skimming in Canada fell from CAD$142 million in 2009 to CAD$38.5 million in 2012, according to the Interac Association. Interac debit card fraud losses as a result of skimming hit a record low in 2013, decreasing to CAD$29.5 million.

The experiences of the U.K. and other countries that have adopted chip have shown a reduction of domestic card-present fraud. But their experiences have also shown a migration to other types of fraud, namely card-not-present (CNP) fraud and cross-border counterfeit fraud (particularly ATM fraud). Fraud migration offsets some of the savings from the decrease in domestic card-present fraud. This reality reinforces the need for a layered approach to security, even with EMV deployment, to address fraud migration and other security vulnerabilities.

9. How does card authentication work with EMV?

10. How are cardholders verified with EMV?

Depending on payment network rules and issuer preference, chip cards are personalized with one or more CVMs in order to be accepted in as wide a variety of locations as possible. Different terminal types support different CVMs. For example, attended POS devices, in addition to supporting signature, may support online or offline PINs (or both), while some unattended card-activated terminals may support “no CVM.”

11. How are transactions authorized with EMV?

In an offline EMV transaction, the card and terminal communicate and use issuer-defined risk parameters that are set in the card to determine whether the transaction can be authorized. Offline transactions are used when terminals do not have online connectivity (e.g., at a ticket kiosk) or in countries where telecommunications costs are high.

Chip cards can be configured to allow both online and offline authorization, depending on the circumstances. Due to improvements in telecommunications infrastructure worldwide, most EMV transactions are now authorized online.

12. How does contactless technology relate to EMV?

The EMV specifications provide a basis for contactless EMV payments, but do not specify all payment application functionality. Payment networks can implement contactless payment for EMV transactions to function in both offline and online transaction environments and to leverage the EMV cryptogram security function to validate the authenticity of the card and the transaction.

13. How does NFC-enabled mobile payment relate to EMV?

Contactless payment transactions between an NFC-enabled mobile phone and a POS terminal use the standard ISO/IEC 14443 communication protocol currently used by EMV and U.S. contactless credit and debit cards. This means that consumers can use their NFC-enabled mobile phones for payment at the existing installed base of contactless credit and debit terminals that are based on this standard.  Additional information can be found in the Secure Technology Alliance white paper, EMV and NFC: Complementary Technologies Enabling Secure Contactless Payments.

14. How do EMV chip and PCI DSS work together?

EMV chip has strong security features that have been proven to reduce counterfeit card fraud at card-present retail environments. The Payment Card Industry Data Security Standard (PCI DSS) provides other complementary levels of security necessary when the cardholder information reaches the merchant’s system. The PCI DSS contains 12 key technical and operational requirements. Rather than focusing on a specific category of fraud, the PCI DSS seeks to protect cardholder and sensitive authentication data anywhere this data is present within the payment eco-system, thus limiting the availability of this data to fraudsters. When used together, EMV chip and PCI DSS can reduce fraud and enhance the security of the payments ecosystem.

15. Where I can learn more about EMV?

16. Where can I learn more about issuing EMV chip cards to my financial services customers?

The EMV Connection website is a good place to start.  A section of the web site is focused on information relevant to card issuers, including technical guidance and other best practices for EMV chip migration. 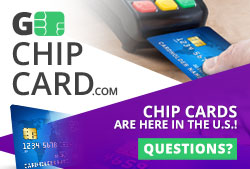 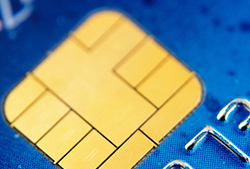